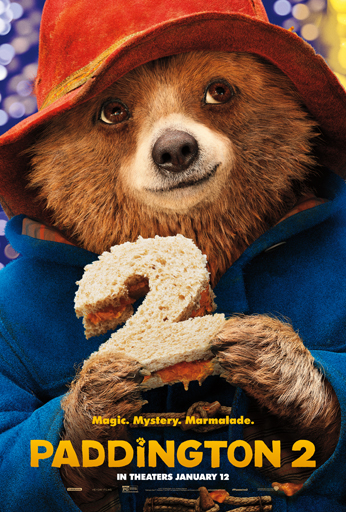 Plot: Paddington Bear gets a job to buy his Aunt Lucy a birthday present, but in the process runs afoul of the law, and an evil Hugh Grant.  Not necessarily in that order.

Child Enjoyment: 8/10  The six-year-old liked the movie quit a bit.  He loves physical comedy, so things like Paddington washing windows with his furry backside were deemed uproarious.  The film’s sentimentality, and the comedic stylings of Mr. Grant, were, perhaps, lost on him. Except for that time Mr. Grant was hit on the head.  Pain is hi-larious.

Parent Enjoyment: 10/10  Utterly charmed.  I enjoyed both the sentiment and Hugh Grant.  Be sure to stick around for Mr. Grant’s musical number during the end credits.

Age Appropriate:  Spot on.  The child would like to see it again.

Pain Factor:  Negligible.  The story’s themes of family and the power of kindness are universal, touching, and timely, no matter your age.

Story Assessment: Paddington finds the perfect birthday present for his beloved Aunt Lucy in Deepest Peru while visiting Mr. Gruber’s Antique Shop – an old pop-up book showcasing some of London’s wonderful sights.  One of the movie’s most delightful vignettes involves Paddington walking, in his imagination, with his aunt through the pop-up book and showing her London’s landmarks in cardboard form.  The book is sadly expensive.  Undeterred, Paddington embarks on a series of odd jobs to raise enough money to buy it for her.  The night before he is to purchase the book, however, it is stolen from the shop, and Paddington blamed for its theft.  Paddington’s family in London must work together to find the real thief, while a jailed Paddington teaches the other prisoners about the power of kindness, good manners, and friendship.

Hugh Grant co-stars as a once successful actor, now reduced to dog food commercials, who seeks funding for his one-man show in some unusual places.  I’m no expert, but Mr. Grant seemed to be having a very good time.  As will you, if you see this movie.

In Summation: Loved it.  Sweet without being saccharine, and moving without being manipulative.  The kid liked it too.  Win-win.  I would see it again…and probably will.  You should, too.

An Addendum:  My husband lost his job today, which means Paddington had to clear a pretty high hurdle to our enjoyment.  I had promised the child on the way to school that we would go to the movies this afternoon, which meant I was contractually obligated to make it happen, even though neither the husband nor I was in the mood for it by the time 3:30 rolled around.  Six-year-olds, as you may well know, do not like to be mislead, even if the misleading is the byproduct of an unexpected and panic-inducing layoff.  But it was a good thing we did go.  We all left the movie feeling much better than we went in.  Well done, Paddington.