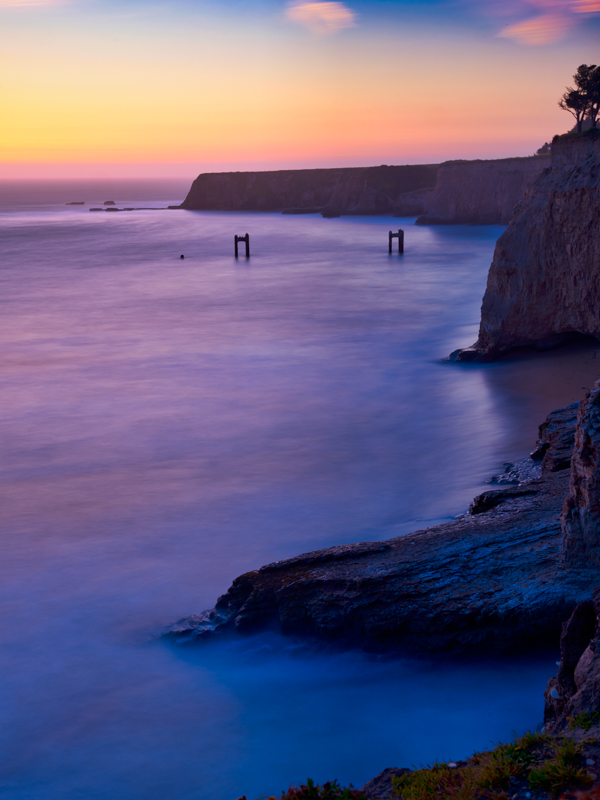 For a long time now, I’ve been wanting to get a picture of the abandoned pier at Davenport, California.  Here it is, at a distance:

Davenport is a tiny town along California’s Highway 1, just north of Santa Cruz.  There doesn’t seem to be much there besides a (pretty upscale) roadhouse, and a handful of smaller eateries geared towards the tourists.  We stopped at the Whale City Bakery for a quick bite, and to use their bathroom.  They seem to be the only people in the bathroom business in Davenport.  Great bread too.

As it turns out, it’s not that easy to get level with the Davenport pier.  This was my second attempt.  After my last failed attempt, I read an article online by one fellow who suggested approaching from an easily accessible alcove to the south of the actual pier.  The idea is that you wait for low tide, and then walk around the rocky outcropping there, and up the beach to the pier.

Yeah, I dunno.  I went down there to check it out as the tide was going out.  The rocks are really slick where the waves have been, covered with a slimy green algae.  Also, the ocean along this part of the coast is no joke.  It moves unpredictably and forcefully.  As a native of the California coast, I am familiar with the rogue waves that semi-routinely suck tourists off the rocks into the sea.  I really want that picture from the beach, but I’m not interested in being an idiot about it.  Also, I had the child with me.  So that was that.

Instead, I headed up to the lookout, and took the above pictures.  I also pulled out the Nikon and got a few pictures of the birds bedding down for the night on the piers.

If you squint, you can see birds there.  I dream of having one of those big birding lenses someday, to better take crap bird pictures with.  That, and someone to carry it for me.  I hear they weigh a ton.

Anyway, before leaving, I drove up to the ledge closest to the pier and scoped out the shot I’d like to take someday from the ground level:

As you can see, there’s a beach down there, a beach that other people have visited, judging on the footprints in the sand.

On my way back to the car, I ran into a few locals making the return trip.  I asked them how they got down to the beach.  They told me they scaled the cliff.  That’s not an exaggeration.  It’s a cliff.  They said that there’s about ten feet of rope that you use to lower yourself part of the way down, or haul yourself back up to the edge, but according to these two kids, the rest of the trip is free climbing.  “You need to be able to pull yourself with your arms,” said the girl.  “Also, wear good shoes.”

So yeah.  I don’t know if I’m going to get that dream picture.  I’m certainly not going to do it while I have the child with me.

In the meantime, I guess I’ll have to console myself with the lookout shot.  It’s a pretty fine view in its own right: