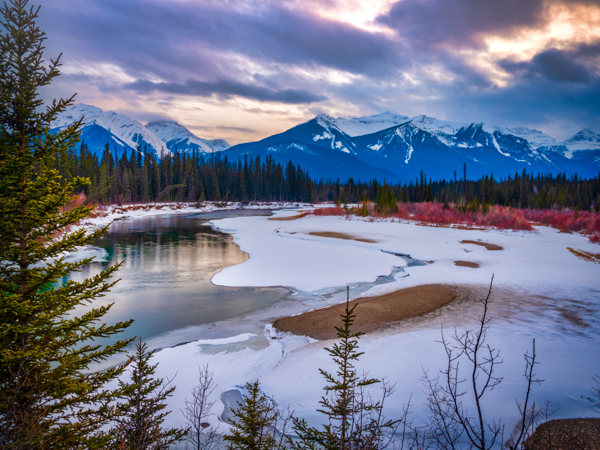 Believe it or not, I’d never been to Canada before last weekend.  Wild, amirite?  I mean, it’s literally a two hour plane flight away.  So when the in-laws offered to take us to Banff for a few days over Z’s spring break, I said absolutely.

For those of you not in the know, Banff is a massive national park located in the middle of Canada.  In order to get there, you have to fly into Calgary (very nice airport, and surprisingly large for the apparently limited number of travelers it sees), and then drive about an hour.  If the Canadian flight crew was any indication, Canadians are unfailingly polite and chipper.

I wouldn’t know, because most of Banff appears to be staffed by Australians.  No, really.  I guess they are chasing the snow.  I also met a New Zealander.  But mostly Australians.

Not too shabby.  Because I was traveling with a child and parental units, we didn’t venture too far from the tiny town of Banff most of the time.  All of these pictures were taken a few minutes away from the town center.  Here’s some more:

I bet this frozen lake is super pretty when it isn’t frozen, or even when it is partially frozen.  I wonder when the melting happens.  Late May?  June?  Although even frozen, the landscape still had a stark beauty about it.  I feel like I didn’t do it justice.  I don’t have a lot of experience photographing in the snow.

The kid was super pumped to see snow.  I guess he saw it once when he was a baby visiting Wyoming, but of course he doesn’t remember it.  For the most part, he’s a fair weather fellow who has only seen snow on television.  Canada provided him with plenty of the stuff.  He even got to see it fall from the sky:

I handheld this shot on the way out the door from dinner at a high ISO while there rest of my party tapped their feet in the car.  Go modern technology.

Anyway, you have no idea what a momentous event this was for a seven-year-old.  Snow.  Falling from the sky.  He wants to move there.  Who knows?  If Trump gets bad enough, maybe he will have an opportunity.

Although here’s the thing about Canada: It turns out it’s cold.  I mean, really cold.  I’m the sort of lady who likes her climates somewhere between 60 and 80 degrees Fareinheit.  Which is to say, super temperate.  Because I am a super weenie.  Canada is not super temperate.  Several generations ago, one branch of my family came to the U.S. from Sweden.  Another branch of my family came from a small town in eastern Europe.  I’ve never been to either location, but I’m willing to bet it’s pretty cold there too.  Which means at some point, my family was hardy.  Several generations of American citizenship has produce me, a total lightweight.  I bet I’d struggle to make it through a Canadian winter.

Although never say never.  Because Trump.

Anywho, Banff was beautiful.  I’d totally go again, if the opportunity presented itself.  We’re thinking of trying to drive up there over the summer sometime, which, coincidentally, is what my parents did for their honeymoon all those years ago.  In a van.  With some dogs.  Hey, they were hippies.  It was a thing.

Of course, we’re also telling people that we might go camping in Oregon over the summer.  If you ever read Big Dog and Little Dog, you’ll already have an idea as to how likely that is.  Stay tuned, sports fans.  I’m sure I’ll let you know where we come out on the matter.