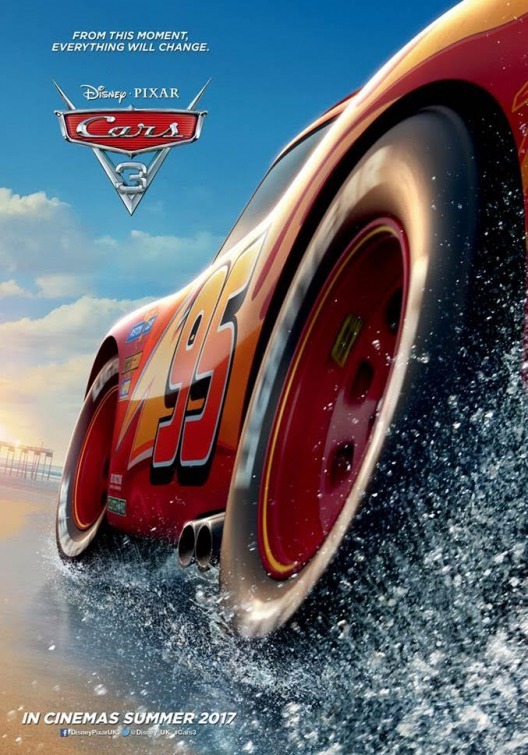 Plot: In which Lightning McQueen goes searching for his lost mojo in all the usual places.  An excessive number of usual places.

Age Appropriate: On the nose for a six-year-old.

Pain Factor: Could be worse.  I’m not into cars, and I’m not a member of any other demographic that might be attracted to a movie about cars.  I can’t speak to what that demographic is, beyond children of course, but this movie has its fair share of characters with folksy drawls who live in small towns, listen to country music, attend demolition derbies, and dream of the big time, which happens somewhere in Florida.  Make of that what you will.  As someone who doesn’t speak with a folksy drawl, live in a small town, listen to country music, attend demolition derbies, or have any desire to go to Florida, I think it’s safe to say that if I can make it through such a movie without squinting too often at my watch, it can’t be all bad.  “It can’t be all bad,” is exactly the sort of low bar a kid’s movie has to clear for me to recommend it to other long-suffering parents.  Mission accomplished, Cars 3.

Story Assessment: I actually saw this movie in the theater.  The deal with seeing a movie in the theater is that, unlike at home, where I’m on the computer, or on the phone, or on the computer and on the phone while the movie is playing, in the theater I am forced to actually pay attention to what’s going on.  I’m not about to be that asshole who messes with my phone during the movie, even if the movie is only Cars 3, and I’m sitting alone but for my offspring in the very last row of the theater.  I may or may not choose this seat every time, on the off chance that the movie is so abysmal that I can’t help myself.  Hasn’t happened yet, but I like to keep my options open.

The movie also clearly had to hit some predetermined, inorganic plot points, maybe to meet expectations of the genre, or of certain animators.  McQueen needed to win some races.  He needed to lose some races.  He needed a character or two to conflict with, however weakly outlined (and they were pretty weak, which was a total waste of Nathan Fillion and Armie Hammer).  He and his newfound sidekick, failed racer-turned-trainer Cruz Ramirez, had to search out a new mentor for McQueen (his old mentor, the late, great, Paul Newman, having moved onto that great parking lot in the sky).  They needed to attend a demolition derby.  They needed to drive in the Grand Canyon, or its equivalent.  McQueen needed to visit the town from the first movie.  He needed to talk, briefly, to his otherwise superfluous girlfriend from the first movie.  It goes on and on.  It’s really quite extensive.

In the end, McQueen achieves some kind of resolution: After meeting up with his new mentor, honing his skills as best as he is able, and fending off threats of forced retirement from his new sponsor, McQueen is forced to admit, sorta, that his best days may be behind him.  McQueen wins the right to quit racing when he feels like it, turning his attention increasingly to the mentoring of Cruz.

In short, it’s sort of the plot of Mr. Baseball. But with cars.  For six-year-olds.

In summation, I have spent worse 109 minutes in movie theaters before.  That’s some kind of success, I guess.