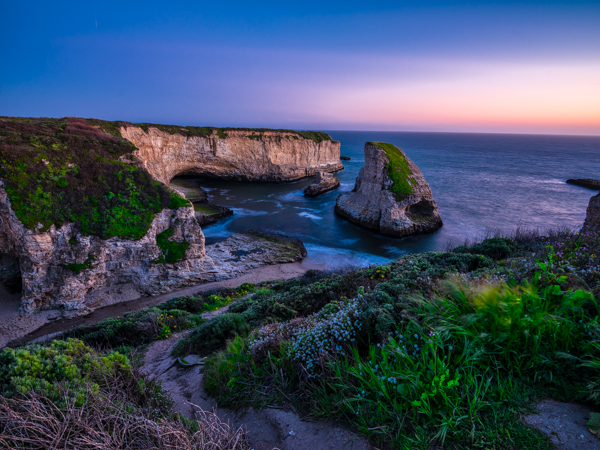 I have been meaning to visit some of Santa Cruz, California’s famous beaches for awhile now.  It’s taken me longer to make it happen than I would like.  Santa Cruz is over an hour away from where I live, and requires driving over 17 at night.  I’ve never liked highway 17.

I finally made it out to Shark Fin Cove over Easter weekend.  This enabled me to leave the offspring with my parents.  The offspring always likes a good adventure, but sometimes it’s more relaxing to leave him at home.

For example, climbing down onto a strange beach over a rocky trail is less stressful with only adults present.  Here’s the shot from above:

I’m going to go out on a limb and say that that rock sticking up out of the water is the “shark’s tooth” the beach was named after.

The climb down to this beach was nowhere near as difficult as getting to the Tunitas Creek Beach.  Still, you have to duck under a pipe, and scramble down a path to get there.  The camera and tripod present an added degree of difficulty.  On the other hand, I saw several out-of-shape ladies in flip flops make a go of it, so it’s clearly doable.

The beach has several neat caves and viewpoints, depending on the tide levels.  I liked this one quite a bit:

There’s also some nice views from the rocks on the beach:

It was all very pretty, even with the smoggy, cruddy atmosphere, and the multitudes of tourists.

Here’s the thing, though: It’s been awhile since I’ve been to Santa Cruz, and I can’t even remember when the last time was that I went to a Santa Cruz beach.  I was thus truly saddened to discover that the rock formations at this one were covered with graffiti, and the sand with trash.  Do better, Santa Cruz.  This is why we can’t have nice things.

I also made a trip to see the Bixby Creek Bridge in Big Sur:

It’s famous for a reason.

The moon was full, which helped with my bridge lighting considerably.  My dad gave me his Nikon d7200 for my birthday, so I used it to take a picture of this:

One of these days, I’ll do a full post on Big Sur.  As my bridge picture came out blurry, today is not that day.  I’m still struggling with how to focus the Fuji at night.  I’ve got a pretty good handle on how to do it with the Nikon (used in the moon shot), but my Fuji shots are incredibly hit or miss.  Literal shots in the dark.  Yuk yuk yuk.

It turns out there’s also a lighthouse in Big Sur.  We tried to visit it, but it looks like you need to set up a tour to go see it at night.  As I said, a post for another time.