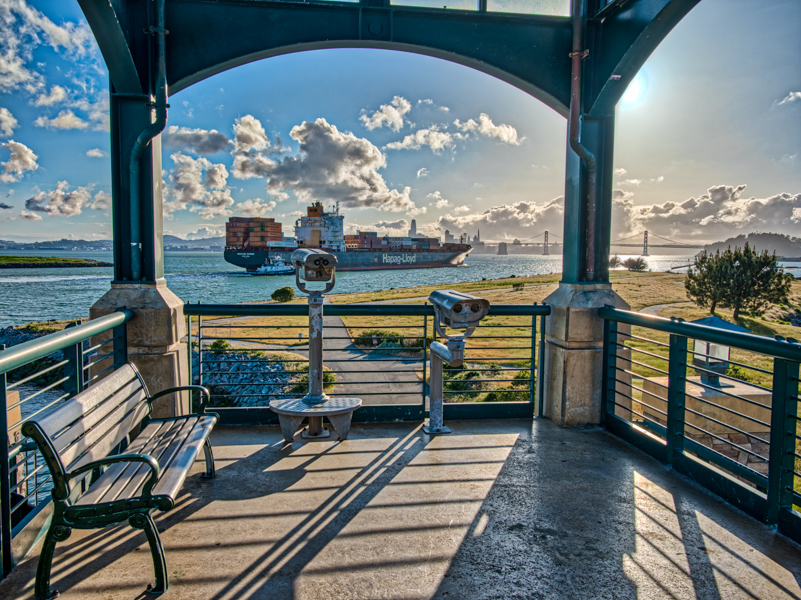 On Saturday, I went looking for something really, really local to document, because the family was tired of sitting in traffic, after our earlier sojourn into the city.  For those of you non-Northern Californians, there is only one city, and it is San Francisco.

An aside about traffic: WTF, 880 corridor?  If I wanted Los Angeles levels of traffic, I would move to Los Angeles.

Anywho, we decided on the Middle Harbor Shoreline Park, in Oakland, California, because it was close to the shipyard that I had intended to photograph, and the weather was nice.

People give Oakland a hard time, but it has a lot of loveliness, even around its massive, industrial shipyard.

The park offers some beautiful views of the city’s skyline:

I will be honest, I hadn’t anticipated wildlife.  I was using a camera that doesn’t exactly specialize in action shots.  Canada geese don’t move very fast, but it appears they move a little too fast for the Fuji.  Next time, the Nikon will come with.

The park also boasts a nifty viewing center, to give you a better vantage on the ships entering and exiting the Port of Oakland.

As you can see, the geese also favor the observatory.

I bet this building is pretty at night, when the lights are on.  Alas, it’s getting light later, and the child turns into a pumpkin way before the sun does at this time of year, so we couldn’t stick around for the show.

The view from the viewing center isn’t too shabby:

All in all, this little local attraction was much more engaging than I had expected.  Shame on me, because again, Oakland’s a hidden gem, and I should know better.  One of these days, I’ll go take pictures of some of Oakland’s fantastic deco architecture.  Stay tuned, sports fans.

And that’s a wrap!