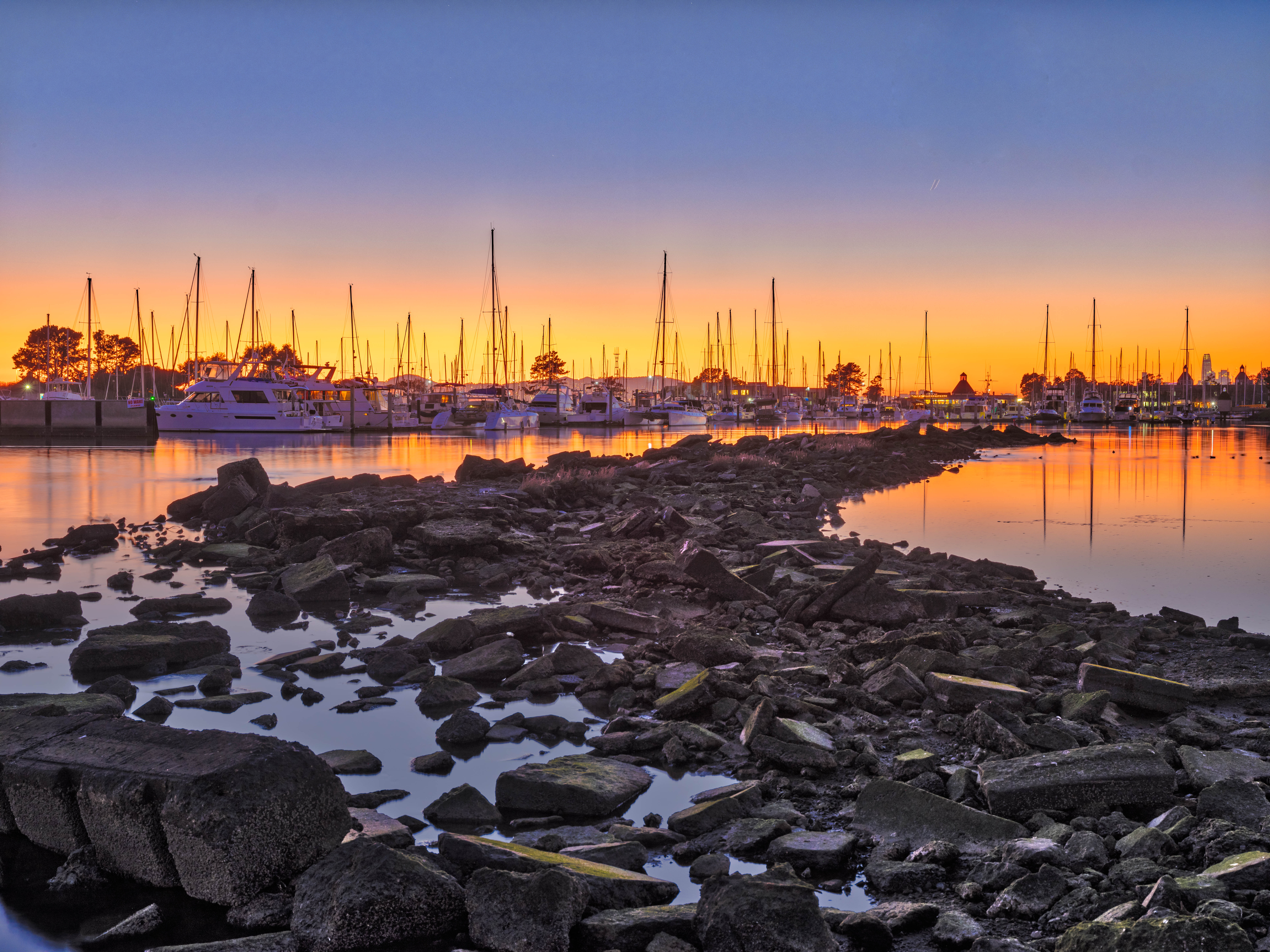 I am fortunate enough to own a lovely Fuji camera, which I bought with an unexpected windfall several months ago.  When I bought it, it was on the self-imposed condition that I would use it ALOT.  The camera is a ridiculous luxury for people like us, and I should only have it if I’m going to use it all the time (and maybe not even then).  So, use it I do, even on days like this one, when there was no time to go anywhere exotic or exciting.

Given how early the child goes to bed, and given that these were taken on a school night, I couldn’t stray very far from home.  So, I grabbed the spouse and the child and the dog (as you do) and headed down to the marina at Crab Cove in Alameda to take in the sunset.

We get some great colors due to the nearby city lights and, sadly, to the air quality, and this evening was no exception.  The picture above is shot looking out at the dock.  Learning from my last photography attempt in Monterey, I shortened my exposure.  It turns out boats are on water, and water is always moving, which means if you use a long exposure, you’re going to get a bunch of out-of-focus masts.  I probably could have done this better, maybe by upping my iso and shortening the shutter even more, but still, an improvement on my last attempt.

In the other direction, you could actually see some stars, although the horizon was blown out by light pollution.  The streaking lights are likely airplanes taking off from the Oakland airport.  I kept them in, because I think they look a little like low-flying shooting stars.

One day I hope to get my hands on one of these, a filter which is supposed to help with the light pollution issue.  I’ll let you know if it ever happens for me.

I wish I had done a better job on the foreground – the whole photo was kind of a throw-away, as I was leaving my location on the rocks to avoid the incoming tide.  On the one hand, a smaller aperture would have helped me with my depth of field, which would have put these rather uninspired concrete junks in better focus.  On the other, the smaller the aperture, the higher the ISO and shutter speed.  I was hoping to get some stars in my picture, which meant there were limits to how long I could expose the picture before I got star trails.  Ah, physics.  And, of course, more ISO means more grain.  I don’t love graininess.

Finally, reflections in the still inlet water.  Reflections are always awesome.  I wish I knew how to keep the lights from the houses from bleaching out.  Adding this to the list of things to learn for next time.

Until next time, dear readers.