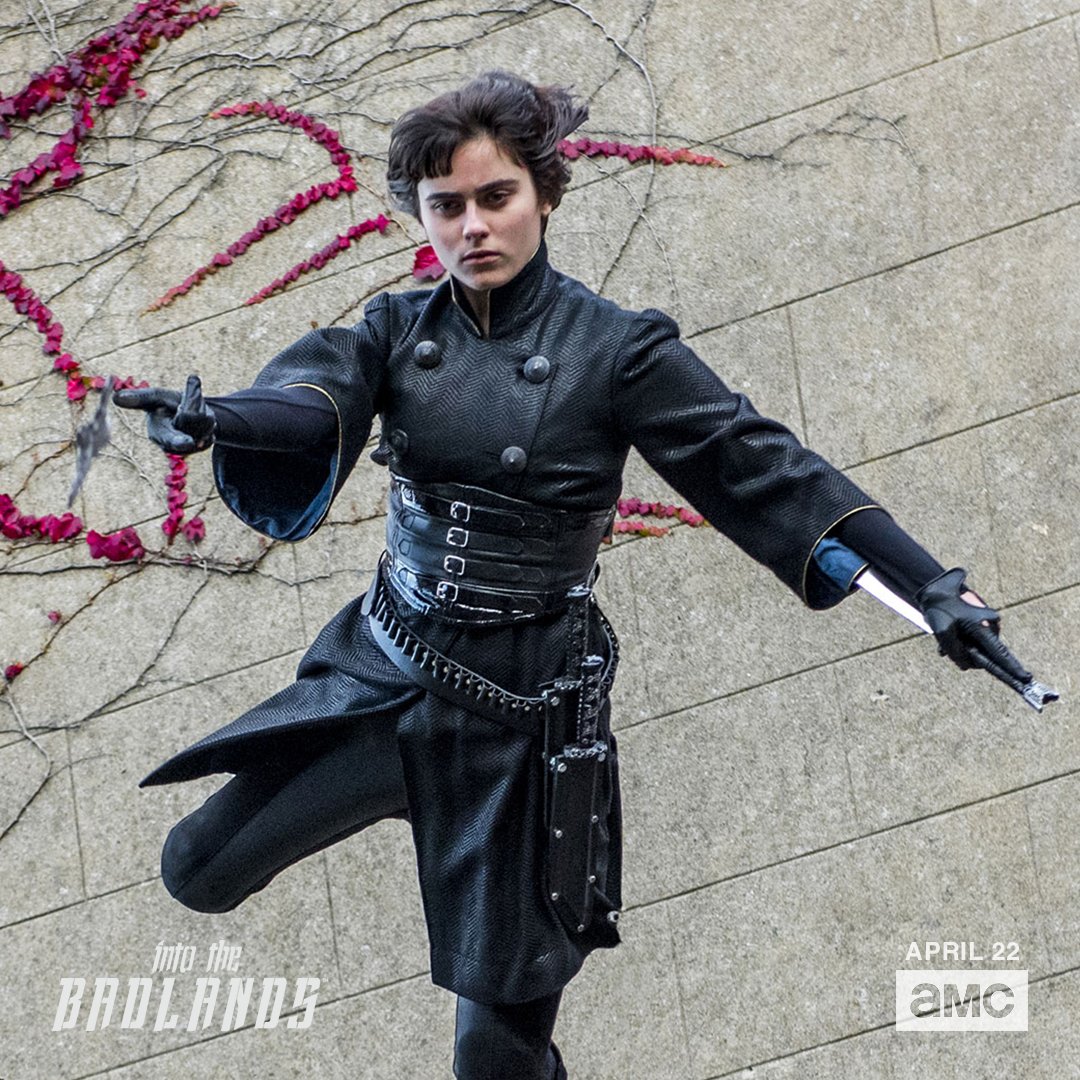 As some of you know, I have this little hobby whereby I rewrite dialogue I find problematic in shows I (usually) like.  Let’s have some fun with Into the Badlands, shall we?

Into the Badlands is a television show on AMC.  It is set in a dystopian future where Barons (warlords) rule great fiefdoms, and most people live in poverty and squalor.  For reasons I can’t remember, modern technology is largely forgotten.  An unexpected side effect of this dark age is that everyone seems to have become a kickass martial artist.

This is a beautiful (really, really beautiful) show, with a cool concept, awesome fight choreography, and fantabulous costumes.  I’m not kidding, these are ROCKSTAR costumes, particularly in the menswear department.  Check it out:

Mind blown.  And I know from costumes.  Here, have another:

I’m not kidding, I could do this all night.  I am floored by the quality of the clothing on this show, from the workmanship to the textiles.  The coats particularly are things of beauty.

But wait!  It also has magnificent set pieces:

But hold on!  There’s even MOAR!  Check out the fight choreography:

SO SLICK!  Pardon my fangirling, but I just can’t help myself.  It’s that cool.

Which is why it pains me a little to point out that this gorgeous, unique show sports some clunky-ass dialogue.

Some of it is so bizarre that I considered doing a post dedicated entirely to ridiculous one-liners gleaned from the second season.  There’s a lot of them.  But why look back when you can look forward?  The third season is here and I I think we should embrace it.  Because despite its inorganic character development, inexplicable plot twists, and wonky speech patterns, I love this show.  Love-hate it.  Mostly love it.

Let’s look at a representative scene from the season three premier.

Our story is as follows: Young M.K. had a “gift” in which, if he was cut, he would black out and attack everyone in the near vicinity with superhuman skill and strength.  He spent a lot of time bemoaning this “gift” before losing it in the middle of last season.  Now he and the Widow (a Baron and former “gift” holder herself) want to get it back for him.  Except also, the Widow is holding him prisoner.  He’s waiting for his good buddy/father figure Sunny (star of the show) to come rescue him.

Setting: M.K.’s prison cell is a fancy bedroom in the Widow’s well appointed home enclosed in bars.  We find him smoking atmospherically from a hookah, with two half-dressed ladies in his bed.

MK.  You haven’t held up your side of the deal.

Widow: I can’t help you get your gift back if you won’t let me.

Widow:  I’m still your only chance of ever leaving here alive.  Sunny – He’s forgotten you.

MK:  And what about you?  Tilda ran away.  Even Waldo got sick of your bullshit.

MK: Go on.  Maybe you just haven’t cut me deep enough yet.

She nicks him with her knife.  Nothing happens.

MK tries to hit her.  She easily knocks him to the floor.

MK: You’re wasting your time on me.

Widow locks him back up and leaves.

The dialogue above is hardly Shakespeare, but it also isn’t the worst this show has to offer.  Who can forget that time someone hissed, “If Quinn dies, his loyalists won’t hesitate to take their revenge!”? (Season 2, “Sting of the Scorpion’s Tail”).  Or that other time when one character announced that their friend was in “no fit state” to see someone else? (Season 2 finale)   Oh, season 2.  I just can’t quit you.

I chose this scene, though, because of the elephants in the room, the kind of elephants that this show is riddled with.

For example, the Widow walks into her prisoner’s giant locked caged and is shocked – SHOCKED! – to find hookers in this establishment.  But how did they get in there if she didn’t let them in?

I joke about them being hookers – I mean, who knows, maybe the ladies are just three-some opportunists – but it a world in which women are repeatedly bought and sold, it’s hard to view naked ladies in a cage in any other light than an objectifying one.  The Widow, who views herself as a champion of women everywhere, would never be on board with this.

And while we’re on the subject, when did this character become a hookah huffing, prostitute bedding malcontent?  We’re meant to believe it’s the product his super-cushy six month confinement, but come on.  After everything he’s been through, that’s kind of a stretch.  Then again, the character has always suffered from extreme personality swings.  Until the middle of the first season, he was a wide-eyed, innocent child.  Then he took a hard, unexplained turn into petulant teenager.  And now he’s riddled with world-weary ennui.  I dunno, Into the Badlands.  I’m getting whiplash.

But I can roll with it!  I say, let’s lean into this ridiculousness, and rewrite accordingly.  One of the biggest problems with Into the Badlands dialogue is that it is weirdly, and unevenly, archaic.  I say we fix that for the young folk:

The Widow: What have I told you about keeping prostitutes in your room?

The Widow:  Don’t whatever me, young man.  How are you supposed to get your homework done with threesomes going on?

The Widow:  Your dad doesn’t want you.

The Widow:  He’s forgotten about you.

MK:  Omigod, he’s never coming back!  Even though he stayed with me that time I went crazy and tried to kill everybody, and that other time, and that third time, now that I hear you say it…

The Widow: Wait, are you sassing me right now?

The Widow:  I’m taking it away until you crack down on this gift business.

The Widow:  I’m taking them away too.

The Widow:  You’re grounded, buster.  Indefinitely.  And by “grounded,” I mean “incarcerated.”

The Widow:  You’ll thank me when you’re older.

Same gist, but so much easier for your average twenty-year-old to say.

Have a good weekend, you crazy kids.  This was so much fun I may do it again next week.  Good-Bad television is the best.

Postscript 1:  My son went through this phase when he was three and four where he said things like “in no fit state.”  He still favors the phrase, “I am parched,” to describe thirst.  I guess this means that I will always have a soft spot for the weirdly archaic language favored by this show, even if none of the younger actors can deliver it as well as my toddler did.

Postscript 2:  The dialogue, as it is in so many shows of this sort, is best handled by the over-thirty actors.  Orla Brady, Sherman Augustus, Stephen Lang and Nick Frost are all awesome.  Marton Csokas was absolutely phenomenal, but (spoiler alert) was sadly killed off last season.  The lead, Daniel Wu, is fine.  All you young people, though…get thee to acting schools, young people.  I know some producer thinks you’re hot, but by and large, you guys and gals are pretty rough.

Recent increases in American uptalk aside, your average American drops their voice at the end of the sentence.  There’s no surer tell for an English/Irish person attempting an American accent (besides the harsh, over-enunciation of consonants, of course, and the desire to turn us all into yokels) than someone who never seems to conclusively end a sentence.   Actress Sarah Bolger in particular struggled mightily with this.

Another obvious tell: although the English seem to push their voices forward, into their teeth, Americans tend to place their voices deeper back, somewhere in the middle of their mouths.  I have this idle, of course totally unsupported theory, that this forward-pushing thing that the English do is the reason they have no lips, mostly because I think about it every time I hear Kenneth Branagh speak and as we know, Mr. Branagh came up short in the lips department

Postscript 3: Last season, the main villain of Into the Badlands had a brain tumor.  Deus Ex Brain Tumor was a catch-all plot device whenever decision-making got too attenuated.  That guy died at the end of last season, but I get the distinct feeling that in season 3 Deus Ex Brain Tumor still reigns supreme.