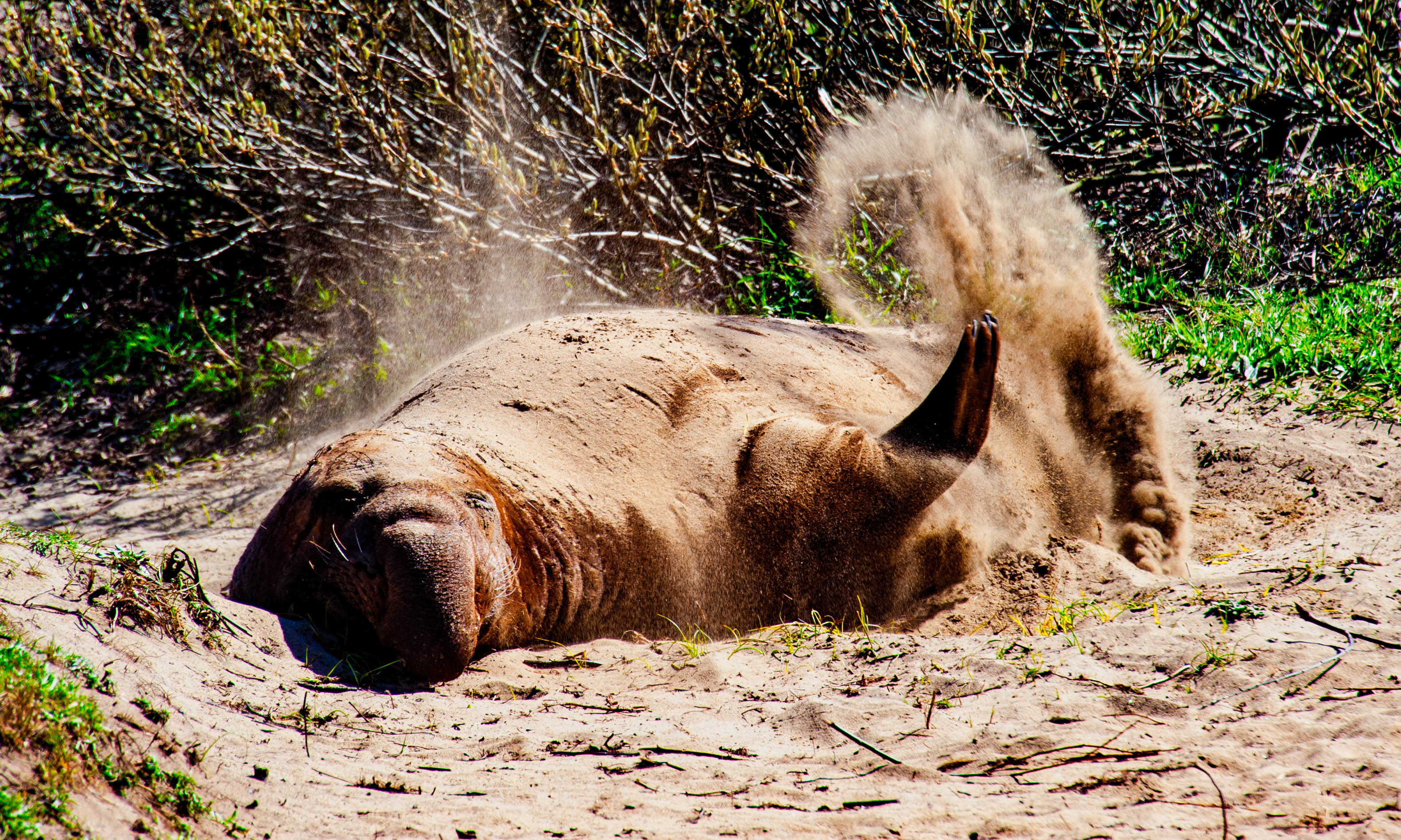 This past weekend we took a trip to visit the elephant seals in Ano Nuevo, California.  We took a guided walk through the California Department of Parks and Recreation.  I tried to sign up for this back in November or December, and to my surprise the walks were already almost all filled.  It turns out that if you want to see the male elephant seals fight and strut their stuff you need to get there early.  By March, most of the females have left, and what’s left are some seriously subdued males, and a whole bunch of youngsters called weeners.

After checking in prior to the tour start time, the docent sends you down the path to meet up with your naturalist.  Not a bad view, right?

The naturalist station had some visual aids to consider while waiting for the tour to start, in the form of animal skulls.  Behold:

The child was fascinated, if a little concerned, to discover that elephant seals have teeth.

But what is an elephant seal, I hear you ask?  Why, it’s a seal with a funny schnoz, of course.  Like so:

Only the male elephant seals have the distinctive large noses.  In fact, I would venture to say that “large” is a universal qualifier for the elephant seals of the masculine persuasion.  Here’s a side by side comparison with a female:

I like to think he’s watching in envy as she laboriously scoots across the sand.  She may be working hard, but it’s a whole other story moving two and a half tons.

Seals in the mist.

The above picture is a pretty solid representation of elephant seal life as we witnessed it.  Our guide affectionately referred to the area as “weaner island.”  “Weaners” are recently weaned elephant seal pups.  The beaches were full of them, along with the occasional adult male elephant seal.  The female elephant seals had, for the most part, already departed for the open sea.

We hear that many people prefer to come earlier in the season when the seals are fighting and breeding, but I actually thought this was a great time to visit.  The animals were chill and easy to photograph, and besides, my little guy would have been freaked out if he’d had to witness bloody fights.  Elephant seals are not people aggressive, but still.  Angry, belligerent Ford Explorers.

Much of the (minimal) movement we saw from the sleepy seals involved throwing sand on themselves to protect themselves from the sun.  We were pretty close to this guy, and I’m not sure he ever opened his eyes to look at us.  Prime nap time.

Once upon a time, like so much of our wildlife, elephant seals were nearly hunted to extinction.  Like the sea otters in Monterey, a small number miraculously survived on an unnoticed island, fortunately rediscovered only after the local humans had become more humane.  They now breed on our beaches in the thousands.  If you happen to visit California at the right time of year, I highly suggest a visit to these remarkable creatures.