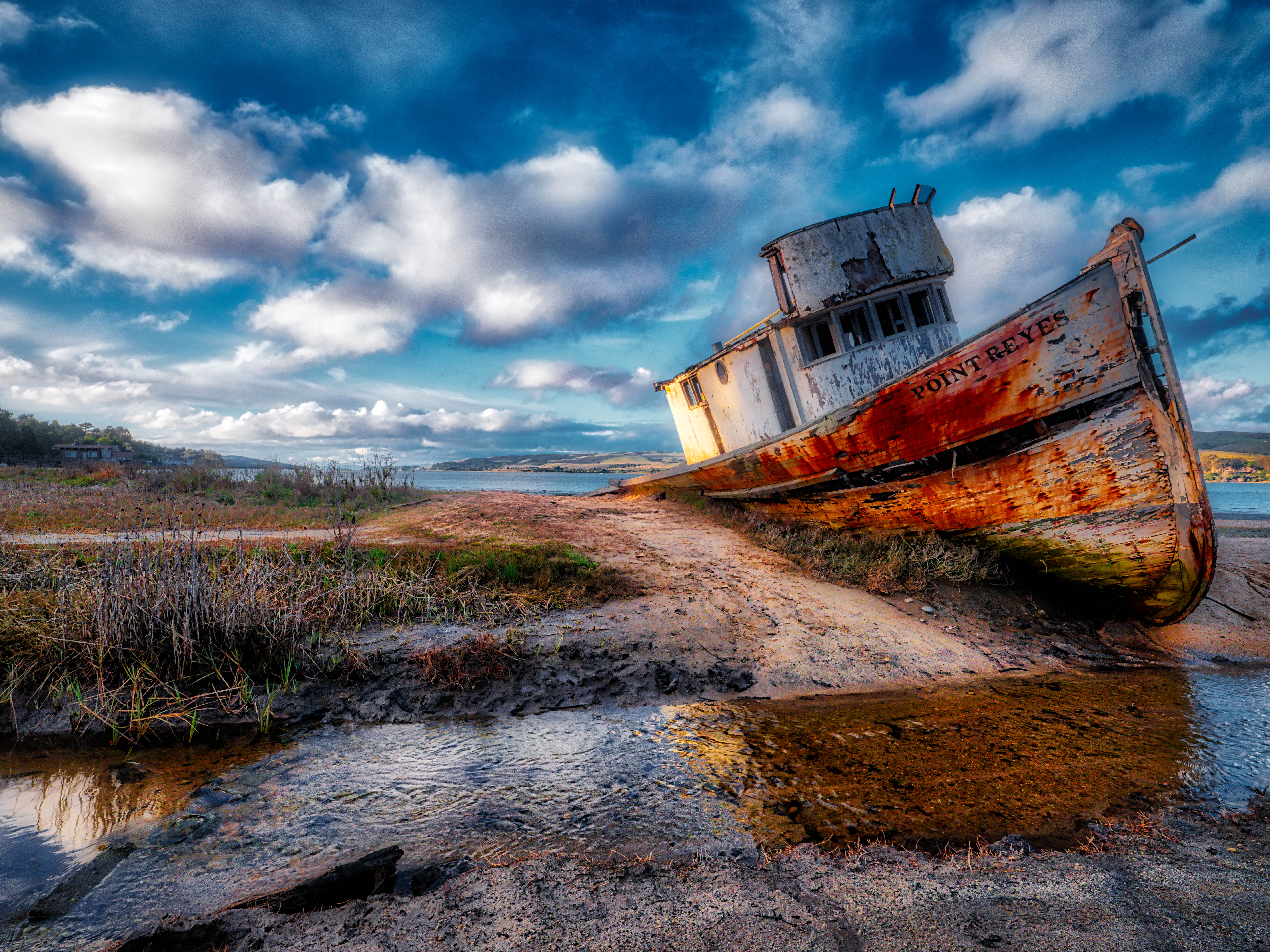 This week we drove back out to Point Reyes to visit the famous shipwreck at the Inverness shore.  We drove by it last time but didn’t stop, because we had a light house to visit.  This time, however, we made the trip especially to see this old boat.

And what a lovely beast it is

The above picture was the product of bracketing and HDR.  Bracketing involves taking the same picture multiple times with several different exposures.  HDR stands for high dynamic range.  HDR photographs are achieved by feeding your bracketed exposures into a magical computer program.  Through some mysterious and arcane process, the computer combines the multiple photos into one image.

I’ve not really HDR much of a shot until now, but since I was out and about, with a tripod, a fancy sky, and a bunch of time, I gave it a whirl.  I wasn’t pleased with my efforts when I got home that evening, but in the light of the next day, I started to come around, and by the end of the week I decided I downright liked it.

About the SS Point Reyes: The SS Point Reyes is an oft-photographed derelict boat in the Tomales Bay.  It has been disintegrating slowly over many years, but in spite of this, or perhaps because it, remains a popular landmark.  The boat sits on land owned by the National Park Service, and is visible from the highway.  It seems to be a popular tourist destination.  I was there for probably an hour to an hour and a half, and during that time saw at least a dozen people stop to look at it.  This may not seem like a lot, but given how remote the stretch of road is leading past it, I think that’s a sizable number.

Apparently,a fire nearly destroyed the SS Point Reyes in 2016.  The blaze was possibly started by amateur photographers who were setting fireworks off the back of the boat in an attempt to capture an Instagram-memorable moment.  The local paper described the fire and its aftermath in an article which you can read here.  I think the boat still looks pretty lovely from the front.  Here’s a picture of it from the back:

All the way burned out, and pretty sad, I think.  Then again, I never got to see the original, so it is hard for me to make a comparison to the ship that was.

My lesson for the week (aside from the HDR/bracketing business) was to look closely at my tripod before tossing it in the car.  I accidentally brought my old one with me.  In my defense, it looks nearly identical to my new one.  The old tripod is mostly functional, except for the fact that the lower part of the legs can’t support the new camera.  So, I was stuck with the camera sitting about 2 feet off the ground or lower at all times.  Upside, though: it was low tide, which meant that the ground was mucky and sticky.  I felt no qualms at all about shoving the old tripod deep into that nastiness.  I might, however, have felt a little bad about doing it with the newer one.

And there you have it!  I highly suggest stopping by the S.S. Point Reyes and giving it a look-see, if you happen to be chilling out in the area.