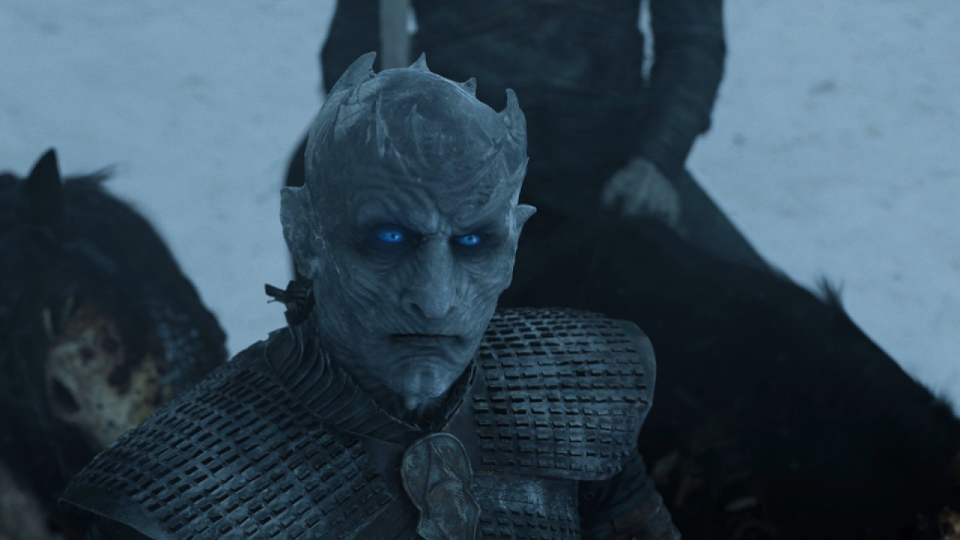 This last point is the one we’re here to address today.  For those of you who don’t know, rewriting scenes that I find problematic in shows that I like is sort of a hobby of mine.  A writing exercise, if you will.

In this scene, the show’s smartest character comes up with the dumbest plan, and a bunch of other smart characters (and also some stupid ones) go along with it in order to further the plot.  Here’s the actual dialogue:

Jon:  I need to go home.
Danerys:  You said you don’t have enough men.
Jon:  We’ll fight with the men we have.  Unless you’ll join us.
Danerys:  And give the country to Cersei?  As soon as I march away, she marches in.
Tyrion:  Perhaps not.  Cersei thinks the army of the dead is nothing but a story made up by wet nurses to frighten children.  What if we prove her wrong?
Jon:  I don’t think she’ll come see the dead at my invitation.
Tyrion:  So bring the dead to her.
Danerys:  I thought that’s what we were trying to avoid.
Tyrion:  You don’t have to bring the whole army.  Only one soldier.
Davos:  Is that possible?
Jon:  The first wight I ever saw was brought into Castle Black from beyond the wall.
Tyrion:  Bring one of these things down to King’s Landing and show her the truth.
Varys:  Anything you bring back will be useless unless Cersei grants us an audience and is somehow convinced not to murders us the moment we set foot in the capital.
Tyrion:  The only person she listens to is Jaime.  He may listen to me.
Danerys:  And how would you get into King’s Landing?
Davos:  I can smuggle you in but if the gold cloaks were to recognize you I’m warning you, I’m not a fighter.
Danerys:  Well, it will all be for nothing if we don’t have one of these dead men.
Varys:  Fair point.  How do you propose to find one?
Jorah:  With the queen’s permission, I’ll go north and take one.  You asked me to find a cure so I could serve you.  Allow me to serve you.
Jon:  The free folk will help us.  They know the real north better than anyone.
Davos:  They won’t follow Sir Jorah.
Jon:  They won’t have to.
Davos:  You can’t lead a raid beyond the wall.  You’re not in the Night’s Watch anymore. You’re King of the North.
Jon:  I’m the only one here who’s fought them.  I’m the only one here who knows them.
Danerys:  I haven’t given you permission to leave.
Jon: With respect, your grace, I don’t need your permission.  I am a king.

If you’ve never watched Game of Thrones (hey, I hear those people exist), here’s what you need to know for the purposes of this exercise.  Danerys, Jon and Cersei (mentioned but not seen) are fighting over the Iron Throne.  Jon has come from the far north to warn everyone of a coming apocalyptic zombie invasion which will render all other fighting trivial.  Most people don’t believe zombies exist, so he’s having a tough time with the sell.  In this scene, Danerys consults with her trusty advisors (Cersei brother Tyrion, a eunuch named Varys, and an exiled knight named Jorah) as well as Jon, who happens to be visiting, peddling his zombie invasion story, and Davos, Jon’s chief advisor.

Got all that?  Good.

Let’s tweak the existing dialogue towards complete transparency and see where we’re at:

Jon:  I’m going to go home and fight zombies.
Danerys:  Do you have enough men?
Jon:  No.
Danerys:  This seems ill-advised.
Jon:  All my plans are ill-advised.
Davos:  True that.
Jon: Speaking of which, I could really use some help with the zombie killing.
Danerys:  You’re cute, but I don’t think so.  Someone has to stay and defend this uninhabited hunk of rock I conquered from Cersei.
Jon:  If I don’t get help soon, the zombies are going to take over everything.
Danerys:  Yeah, that’ll suck, but I’ve got my uninhabited hunk of rock to consider.
Jon:  I guess we’re at an impasse.
Tyrion:  Not so fast, because I’ve got a plan:  Let’s show Cersei the zombies.  When she sees them, she’ll put the war on hold.  Maybe she’ll even help us out with the zombie killing!
Danerys:  Great plan!
Tyrion:  I know, right?
Davos:  This is a terrible plan.
Jon:  Hang on, just catching up over here.  You mean you want to invite Cersei up to my house?  Her son beheaded my dad, and my sisters are still pretty pissed about it.
Tyrion:  Good point.  New plan: We’ll bring a zombie to her.
Varys:  Like, we’re all going to visit her in King’s Landing?  Won’t she kill us?
Tyrion:  My brother Jaime will sort out the details.
Varys:  Yeah, I dunno…
Davos:  This is a terrible plan.
Tyrion: Who’s with me?
Danerys:  I am!
Varys:  I guess we’re doing it.
Danerys:  So who’s going to go get the zombie?
Varys:  Not it.
Tyrion:  Not it.
Jorah:  Totally it.
Jon:  No, wait, choose me.
Jorah: I’ve known her longer.
Jon:  I’m hotter.
Danerys:  You both can do it.
Davos:  This is an incredibly stupid idea.

None of this sounds better in the retelling.  The biggest hitch (among many hitches) is that Cersei has been consistently ruthless in pursuing her perceived enemies for seven seasons.  No one understands this better than Tyrion, the little brother Cersei has loved to hate since they were both children.  The fact that the show’s smartest character is peddling the show’s dumbest plan as it relates to his own sister is insulting, both to him and to us.

I think that what the writers were probably trying to accomplish with Tyrion’s stupid plan is to give Danerys a reason to go north so that she could lose one of her dragons to the Night King (the head zombie-maker).  A fortuitous byproduct of Tyrion’s stupid plan is that most of the main characters then had to convene in King’s Landing.  I can’t speak to whether the King’s Landing bit was necessary, having not seen the final season, but it sure felt more like fan service than plot.  We shall see, I guess.

Fully admitting that I don’t know where the show’s creators are going with any of this,  I think it would be fun to try to find a more believable way to get Danerys and her dragon up north.  Let’s start the same way they did:

Jon:  Bran saw the night king and his army marching towards Eastwatch.  If they make it past the wall…
Varys: The wall has kept them out for thousands of years.  Presumably…
Jon:  I need to go home.
Danerys:  You said you don’t have enough men.
Jon:  We’ll fight with the men we have.  Unless you’ll join us.

So far sorta so good.  If Jon really wanted to enlist Danerys’s help in his fight – and I think we have to believe he does – then it would be smart for him to play up how his people need saving, and even imply that she could win their affections and possibly their allegiance by coming to their rescue.  Danerys has been struggling all season to reconcile her desire to be merciful and adored, with her drive to conquer and destroy.  This scene could have been used to play up both impulses, while simultaneously reminding the audience how Danerys got here to begin with.  She may have been torching entire armies with her dragons mere episodes back, but she acquired her own formidable military through liberation and compassion.

Jon: The people of the north, my people, will surely die without help.
Danerys:  You must understand that I can’t leave now, when we are finally gaining against the Lanisters.  Tell your people that if they swear allegiance to me…
Jon:  My people will not kneel to the daughter of the Mad King.
Danerys:  My father is dead.  My brother is dead.
Jon:  The north remembers.
Danerys:  If they will not kneel to the true queen, then they are traitors.  You have seen what I do to traitors.
Jon:  Come at them like this, and they will fight until every last man, woman and child has died.  Is that what you want?  To be burning children?
Danerys:  What do you suggest?
Jon:  Fight with me.  Ride to their aid.  Show them that you are something greater than your father’s daughter.
Tyrion:  Are you really suggesting that the Queen abandon her armies to fight phantoms?
Jon: There are many who could command her armies in her absence.  You, as her hand…
Tyrion: My queen, you must listen to reason.

Here, Tyrion is back to acting like himself, which is to say, he is the voice of caution and sense.  Danerys riding north, with little understanding of what she is about to face, is a bad idea.  It’s also, however, the kind of thing her character would do.  She has a history of making emotional decisions that have thus far, due as much to luck as to skill, worked in her favor.  It would make sense that this continued, mostly unmerited, success has resulted in complacency.  She has grown too confident in the invulnerability of her dragons.  The loss of one of her children would be that much more poignant, I think, if it grew from her own hubris, rather than as fallout from someone else’s impossibly stupid idea.

Danerys:  I have come to break the wheel.  That’s what we have said from the beginning.  It is time the people of the North saw me for who I am.
Tyrion:  Consider the risks, your highness.
Danerys:  What risks?  I have dragons.  Three invulnerable, fire-breathing, flying dragons.  You are always counseling me to be safe.  What have I gained from this counsel?  Nothing but failure and stalemate.  It is time I embraced what I am.  I am the dragon queen.  These creatures, if they exist, pose no threat to me.
Tyrion:  We know nothing about them, my Queen.  How can we anticipate a foe we do not know?
Danerys:  There is nothing to know.  I will be back before nightfall.

Because apparently she will be, in this new Game of Thrones, a place in which the physics of time and space have become immaterial where travel is concerned.  Aw, I kid because I care.  I love the GoT buddy road trips as much as the next person, but it’s time to get this plot moving along.

Once Danerys is up there, of course, it would be easy for her to come back with a zombie, were that truly necessary for the furtherance of the plot.

So there it is.  Mine may not be the best idea, but I flatter myself, it’s better than Tyrion’s.  Which means a writers’ room full of professionals should, in theory, have been able to come up with something better than either of us.  Come on, Game of Thrones.  I know you can do better than this.