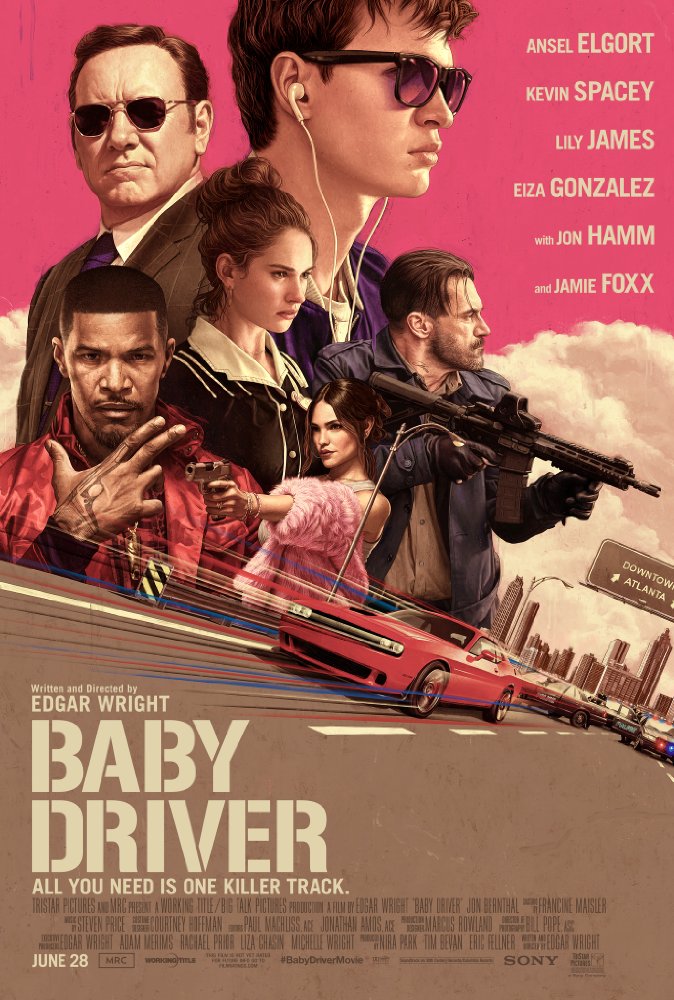 Man, this movie.  Don’t get me started.

Still, a lot of people around the world seemed to like it, and I’m not really here to bag on it.  I’m here to bag on its dialogue.  For those of you not in the know, I get a kick out of rewriting bits of other people’s scripts.  Kind of like a writing exercise, I guess.

Let’s look at the scene in which Baby first meets the waitress of his dreams, Debora.  Note:  I’m going to format it more like a play than a screenplay, because it takes less effort.  We’re all about conservation of resources here at Whistling Far and Wee.  Here’s the original language, transcribed by yours truly:

Debora: Sir, what can I get you this fine morning?
Baby: Uh…
Debora: Don’t worry if you need a second. I have all the time in the world.  Wow, are you recording this?  Am I being monitored for quality assurance?
Baby: No, I… I, no.
Debora: (into the tape recorder) Hello?  Hello, testing?  What can I get you this fine morning, sir?
Baby: Um…
Debora: Oh, um, You know that’s a kid’s menu, right?
Baby: Yeah, oh.
Debora: Forget it, it’s early.  Are you just starting your day, or did you just get off?
Baby: I don’t know if I ever get off.  They call, I go, you know.
Debora: So what is it you do?
Baby:  I’m a driver.
Debora:  Oh, like a chauffeur?  You drive around important people?
Baby: I guess I do.
Debora:  Anyone I’d know?
Baby:  I hope not.
Deborah:  Well aren’t you mysterious?
Baby:  Maybe.
Deborah:  Maybe?  (laughs) So when was the last time you hit the road just for fun?
Baby: Yesterday.
Deborah:  Oh, then I’m jealous.  Sometimes all I want to do is head west on 20 in a car I can’t afford with a plan I don’t have.  Just me, my music and the road.
Baby:  I’d like that, too.
Deborah:  So you decide on anything yet?
Baby: You are so beautiful.
Debora:  You just decided that.  Oh, well, thank you.  I’m sure you don’t mean it.
Baby: I do mean it…Jonathan?
Debora:  Oh, sorry.  You know, this isn’t my badge.  I’ve only just started here, so…
Baby:  As a Jonathan?
Debora:  Yeah.  As a Jonathan.  Well, um, if you have any more questions, just holler.

At the end of this exchange, we need to believe that Debora is so sold on this random guy in the diner that, a few scenes later, she’s willing to run off with him. The only thing that’s going to sell it based on this dialogue is some other-worldly onscreen chemistry.  These folks don’t have it.

So, with this little space and interpersonal dynamism to work with, I guess these two people better get right to the point:

Debora: Sir, what can I get you this fine morning?
Baby: I’d like your phone number.  And also the eggs.  Fried.  But first your phone number.
Debora: You’re cute, but not that cute.  You got a job?
Baby: Yeah, but it’s kind of a transitional thing.
Debora: What’s your line?
Baby: I drive people places.
Debora: Like a chauffeur.
Baby: Yeah, only with benefits.  Great coworkers.  Big bonuses.
Debora: If I got bonuses I’d be out of here and halfway across the country.  My life sucks.
Baby: Aside from the cars I drive, my life sucks too.  You know when I said my coworkers were great?  That’s a lie.  They’re crazy.  Crazy coworkers.
Debora: What about your boss?
Baby:  Crazy too.
Debora:  That’s the worst.
Baby: So, whatdya say – do I get a phone number yet?
Debora:  I dunno.  You could be a psychopathic ax murderer.
Baby: Nah, that’s just my buddy, Buddy.
Deborah:  Ha ha ha.
Baby:  Ha Ha Ha.
Deborah:  I guess it all depends.  Think you can get me out of this town?
Baby: I got big plans.
Deborah:  Do those big plans involve blowing this hell hole?
Baby:  You betcha.
Deborah:  Sounds promising.  Got your own car?
Baby: Sure do – sitting there in the parking lot.  Also, I can drive it.  It’s kind of my thing.
Debora:  Sold.  Here’s my number
Baby:  Meet me here tomorrow at eight?
Debora:  Done.
Baby:
Debora:

Seriously, though, the waitress role is totally thankless. Lily James’s entire function in the movie is to provide motivation for Baby, the male lead.  She’s given no backstory, and no character of her own, beyond a wish to “head west on 20 in a car I can’t afford with a plan I don’t have.”  It would have taken a Meryl Streep to infuse this flat, flat part with psychological depth.

So, what to do?  For starters, let’s have her act like a real waitress:

Debora: Sir, what can I get you this fine morning?
Baby: Uh…
Debora:  You need a minute?
Baby:  No, it’s okay.  What’s good here?
Debora: Build your own breakfast’s a deal.  Choose your eggs, your spuds, your grits, your meat, that sort of thing, all for ten bucks.
Baby: Sure, okay.  Fried eggs, I guess.
Debora:  What’s your meat?
Baby: Uh…
Debora: Fried chicken, fried fish, fried steak?
Baby:  How’s the fish?
Debora: Don’t tell anyone I told you, but the fish is three days old,  I’d go with the steak.
Baby:  Okay.  Fried steak.  I’m trusting you.
Debora:  I wouldn’t lead you astray.

All that out of the way, maybe she opens the door for the guy:

Debora: Say, you just get off work?  You look beat.

The script really wants her to laugh and find him charming.  So let’s actually give her something to laugh at:

An ideal opportunity to now reveal what it is that he does, because that seems to be part of the point here:

Debora: So what is it you do?
Baby:  I’m a driver.
Debora:  Oh, like a chauffeur?  You drive around important people?
Baby: I guess I do.
Debora:  Anyone I’d know?
Baby:  I hope not.

If we’re really supposed to believe she’s into this guy, I think it would now behoove the writers to now establish that these two people might have something in common.

Debora:  Do you drive a limousine or something?
Baby:  When I’m on the job, I drive whatever they want.  The rest of the time, that’s my car out there.
Debora:  My dad had one of those a while back.  He’d crank the radio way up on the oldies station.  We were always looking for my mom’s favorite song, you know, after she died.  A little bit of her flying in on the airwaves.
Baby: Debora?
Debora:  That’s amazing!  How did you know?
Baby:  Well, your name tag.  I put two and two together.
Debora:  Oh, gosh, my name tag!  Of course.   Don’t I look stupid.  I can’t believe you know that song.
Baby:  Music’s kinda my thing.
Debora: I miss driving.  I had a pickup for awhile until it broke down.  Now I take the bus.
Baby:  I’m sorry.
Debora:  It’s okay.  I couldn’t afford to gas it anyway.  My dad died a year or so back.  He was real sick, and owed a lot of people money.  I’m just trying to pick up the pieces, you know?
Baby: Yeah.  I got a similar thing.  My foster dad needs a lot of help.  Everything I do is for him.
Debora:  That’s real nice.

Because, no joke gentlemen, a guy who cares about his foster dad is much more of a turn-on than a guy who can’t tell the children’s menu from the adult menu.

Debora:  Sometimes I wish I could just up and leave.  Hit the road, you know?
Baby:  I might know a guy who could fix up your truck if you want.
Debora:  It’s not just that it broke down.
Baby: Yeah?
Debora:  Yeah.  My ex has it.  Long story.
Baby:  You gonna try to get it back?
Debora:  I don’t want him knowing where I live now.  So no.  The bus isn’t so bad.  Only downside’s that I gotta get up real early to make it happen.  But it’s nice and quiet.
Baby:  Let me drive you sometime, when I’m out by you.
Debora:  Oh, I don’t know.
Baby:  It’s my job.  Where do you live?
Debora:  West side.
Baby:  See, I’m out there sometimes.
Debora:  That’s a real nice offer.

Caveat:  I have no practical understanding of the neighborhoods of Atlanta, and just pulled “west side” out of my backside.

At this point, maybe the manager makes some noise in the background to speed them along.  After all, she’s chatting, not working.  But whatever – we’ve established that they have some family drama in common, that he likes music, that she’s broke, and that she would like to leave it all behind.  He’s even (sort of) asked her out.  Now to the recording bit.

Maybe he plays back part of her conversation: “He’d crank the radio way up on the oldies station.  We were always looking for my mom’s favorite song, you know, after she died.  A little bit of her flying in on the airwaves.”

That gets to the stickiest part of all of this, wherein a random guy comes into the diner and starts audio recording the waitress without her knowledge and we’re supposed to interpret it as quirky and cute, rather than disturbing and inappropriate.  It would help a lot if he was apologetic and offered to get rid of it.

Around this time, I bet the manager is getting pretty pissed.  I’d expect her to get back to her job:

Debora:  Sorry, but you never told me what kind of spuds.
Baby: Hash browns.
Debora:  Coffee?
Baby: Never drink it.
Debora:  Yeah, me neither.
Baby:  We got that in common, I guess.
Debora:  I guess so.  Well, um, if you have any more questions, just holler.
Baby:  Want to go for a ride?
Debora:  What’s that?
Baby:  You said to holler if I have any questions.  That’s my question.
Debora:  That’s cute.  Yeah, maybe.
Baby:  How ’bout tonight?  Round eight?
Debora:  Sure, okay, around eight…say, what’s your name?
Baby: Everyone calls me Baby.

It’s not Shakespeare, but then, neither was the original script.  At least this time, we’re giving her something to go on.

There’s some problems with this scene that supersede the actual words being spoken. The movie is set in Atlanta, Georgia.  I haven’t spent much time in Atlanta, but I have spent most of my life in America, which I think qualifies me to say that this dialogue does not sound like it was written by an American, even if we were to cut it the utmost slack and categorize it as stylized.  I do know enough about Georgia to know that it is full of regional dialects, and distinct cadences, and Atlanta, much like the rest of the American south, has its own particular sound.  How hard would it have been to find an Atlanta native to review this dialogue and make it ring true?  I’m thinking not very hard, given that they shot it in Atlanta.

Another, unrelated quibble: Part of the meet-cute involves Debora wearing a name-tag that says “Jonathan.”  “I’ve only just started here,” she explains, except, of course, this doesn’t explain anything, unless the previous owner of her waitress uniform was named Jonathan.  Now that sounds like a good movie.